“MIRACLES OF THURSDAY” HAS A NEW RELEASE AS REMASTERED AND UNCENSORED

Mercury Films is reaffirming its commitment to major Spanish classics and directors by restoring “Miracles of Thursday”, one of Spain’s most controversial films.

This well-known film, directed by Luis García Berlanga, humorously questions the veracity of miracles. The story centres on a group of rogues seeking to fill their pockets at the expense of divine acts and the benevolence of the “Lord”.
In spite of the harsh censorship to which this film was subjected, it was finally released in 1957. Due to the demands of the production company, which belonged to the Opus Dei order, Berlanga was forced to make several compromises and even make changes to the screenplay on numerous occasions.
Until 1994 only this ‘watered down’ version was available for viewing. In that same year, the Filmoteca Española (Spanish Cinematheque) decided to restore that version of the film, but its poor condition led to a search for other copies abroad.

A version that had managed to circumvent the yoke of censorship was found in Brussels and work started on its restoration.

As far as we know, the Spanish government did not allow the production company to continue with the production of the film as Berlanga wanted, even though filming was almost complete.

Mercury Films is undertaking a painstaking process to remaster and restore the uncensored version using the latest and most innovative technology to optimise its viewing and allow the public the enjoy the real story.
The delicate restoration work starts with the physical cleaning of the negative and then the telecine process, that is, its conversion into a format that will be suitable for cinema projection and television broadcast.

This phase includes retouches and adjustments of the colour, brightness, light, format and other variables. Then, all possible defects and details that may alter the final viewing of the film are removed and finally, after the telecine process, the sound is restored. 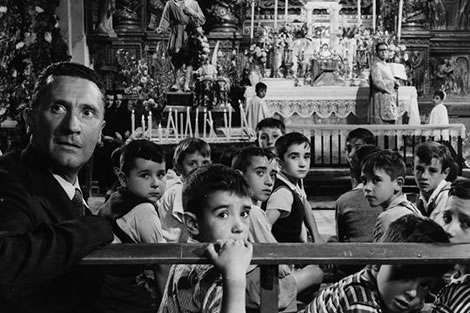