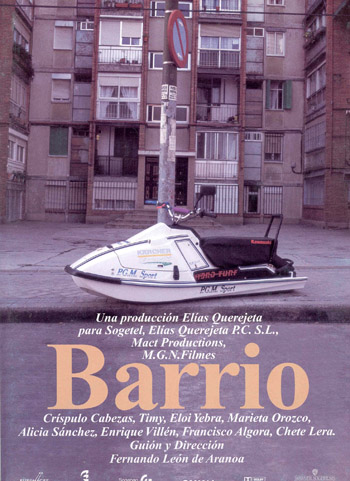 Caught in the concrete jungle, 15-year-old friends Rai (Crispulo Cabezas), Manu (Eloi Yebra), and Javi (Timy) pass the summer dreaming of girls and sandy beaches. Javi is surprised by the sexual interest of his pals in his sister Susi (Marieta Orozco). Minus a vehicle, Manu struggles to keep his pizza delivery job. Entering a contest for an exotic vacation, Rai instead wins a jet ski -- which is stolen before he manages to profit by selling it. Manu and his father (Francisco Algora) lie about Manu's absent junkie brother, while Javi's mother (Alicia Sanchez) gets a court restraint to deal with Javi's violent father (Enrique Villen).

This website uses cookies to improve your experience while you navigate through the website. Out of these, the cookies that are categorized as necessary are stored on your browser as they are essential for the working of basic functionalities of the website. We also use third-party cookies that help us analyze and understand how you use this website. These cookies will be stored in your browser only with your consent. You also have the option to opt-out of these cookies. But opting out of some of these cookies may affect your browsing experience.
Necessary Always Enabled

Any cookies that may not be particularly necessary for the website to function and is used specifically to collect user personal data via analytics, ads, other embedded contents are termed as non-necessary cookies. It is mandatory to procure user consent prior to running these cookies on your website.